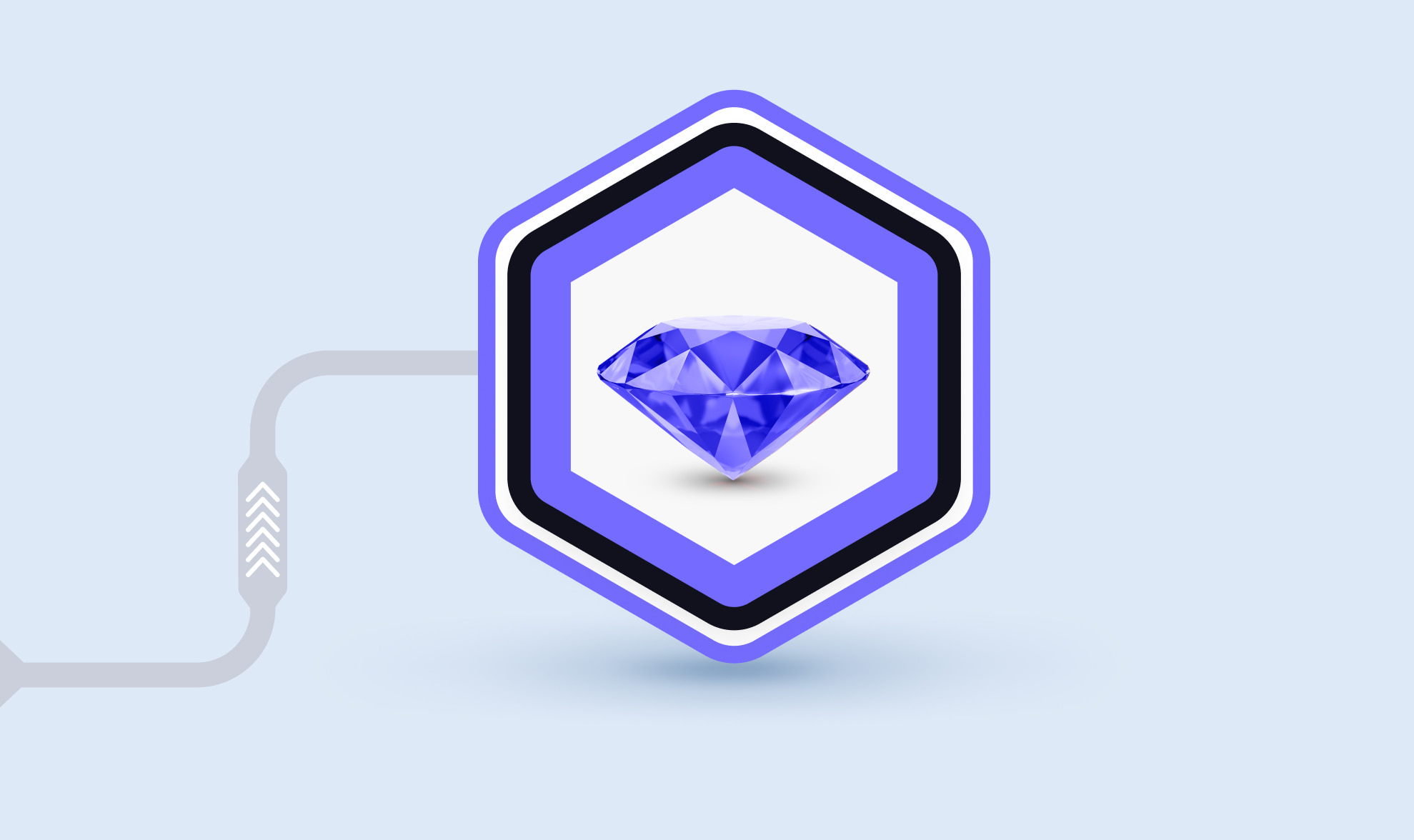 Enterprises have moved to the cloud and adopted cloud-native architectures at a rapid pace. This dramatic shift has allowed organizations to scale more easily and ship code to production more quickly. However, cloud environments and applications can have numerous weaknesses – especially when used incorrectly – that can create risks for organizations and their security teams, including:

Although many of these individual weaknesses can be detected by cloud security tools, most tools focus on a particular risk area, such as workloads, cloud service configurations or identity entitlements. This siloed approach means that the tools cannot see how risks can be combined with weaknesses in other layers of the technology stack to create dangerous attack paths. Until today, security teams have expected long lists of alerts that include top CVEs or notable misconfigurations where they lack context about multiple issues that really matter.

To fully understand where your organization’s most critical weaknesses are, it is important to view risks as an interrelated chain, rather than just siloed risks. By understanding which combinations are a direct path to your critical assets, security teams can operate strategically by making sure that the risks that break the attack path are remediated first. Orca Security does just that with its new Attack Path Analysis dashboard. 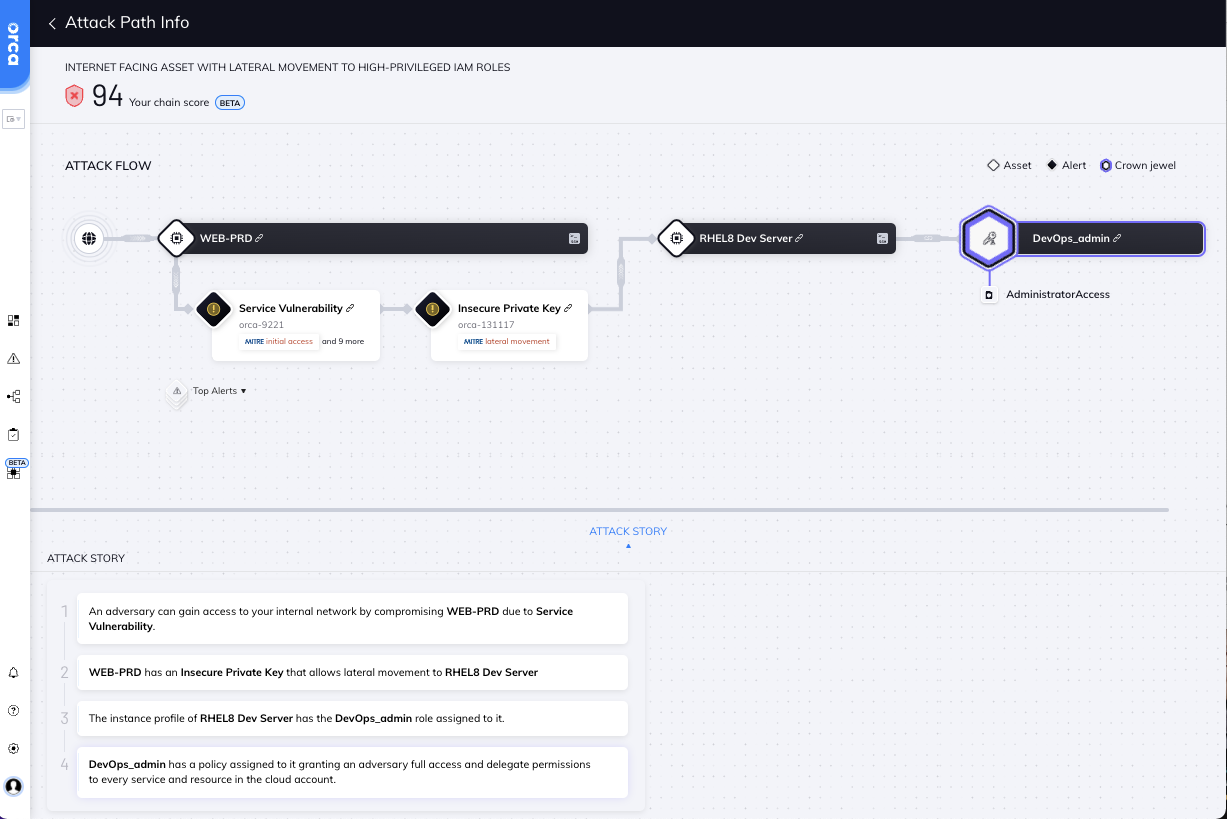 Orca defines Attack Path Analysis as the automatic identification of risk combinations that create dangerous attack paths that can be exploited by attackers. This includes representing attack paths in a visual graph with contextual data on all relevant cloud entities and their risks across vulnerability status, misconfiguration risks, trust and authorization, and data as well as the relations between them.

Orca then combines this information with the location of the organization’s most valuable assets, or ‘crown jewels’, and assigns each attack path a Business Impact Score. This allows security teams to immediately understand which attack paths are the most critical to the business, so they can remediate those first.

For attack path analysis to be truly beneficial, it is essential that the cloud security platform utilizes a unified data model that collects and correlates contextual data on each asset, including information on potential risks in the cloud workload and configuration as well as external and internal cloud connectivity.

With Orca’s new attack path analysis and prioritization capabilities, security teams no longer need to sift through hundreds of siloed alerts to find out which issues need to be fixed and in what order, but instead can now focus on a much smaller amount of prioritized attack paths, or combinations of alerts, that endanger the company’s most critical assets. By prioritizing and scoring each attack path, Orca pinpoints exactly which risks need to be remediated to ‘break the chain’. 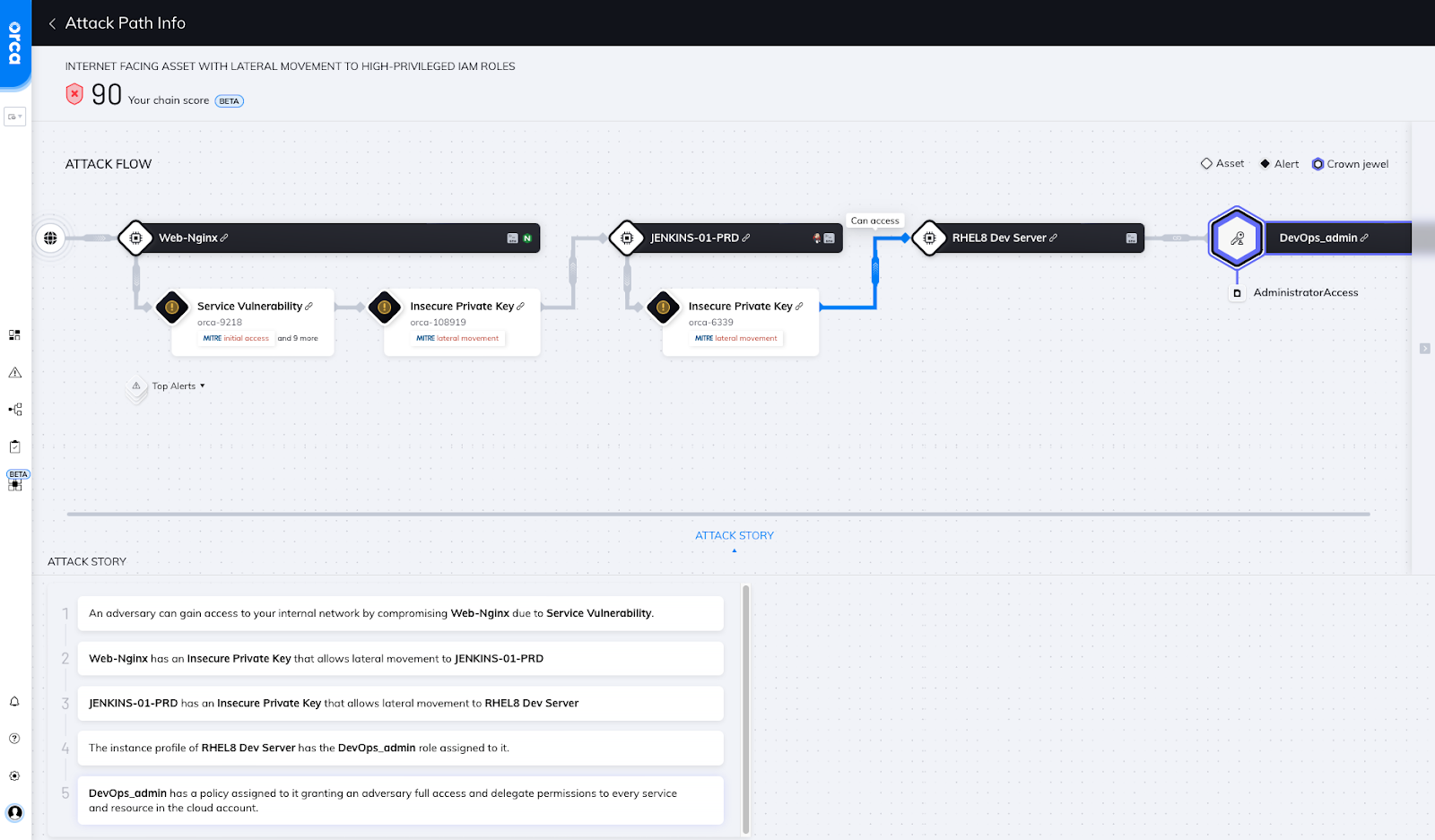 As shown in the screen above, Orca’s new Risk Dashboard lists the Top Five Attack Paths ordered by Business Impact Score to allow teams to quickly identify which issues need to be prioritized.

Orca assigns an overall score (from 0 to 99) to each attack path and scores each attack vector that makes up the attack path. To calculate the score, Orca uses an advanced algorithm that takes the following factors into account: 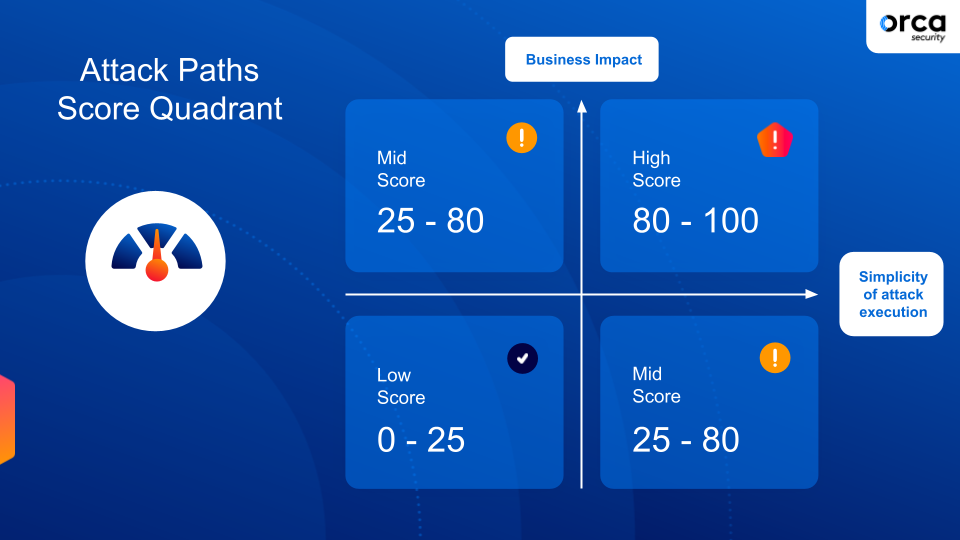 Each attack vector in the path includes tags for easy identification and filtering, including applicable MITRE ATT&CK categories. 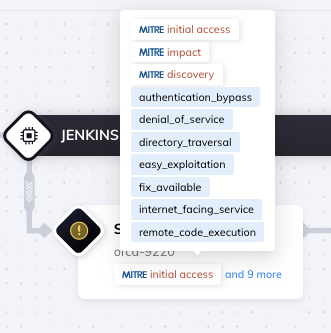 To determine which assets are business critical, Orca automatically discovers sensitive data and critical assets. In addition, customers can tag and classify critical assets themselves. Orca’s “Crown Jewel” categories include Personal Identifiable Information (PII), secrets exposure, intellectual property, financial information, and other sensitive data. The attack paths that endanger the company’s crown jewels will receive a higher Business Impact Score so that remediation of these paths can be prioritized. 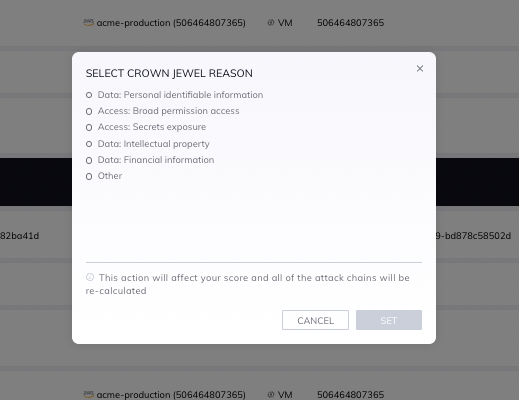 Orca users can tag the crown jewels in their environment

Want to get more hands on? Sign up for a Free Risk Assessment to see how quickly and easily the Orca Security Platform can help you identify and address risks.